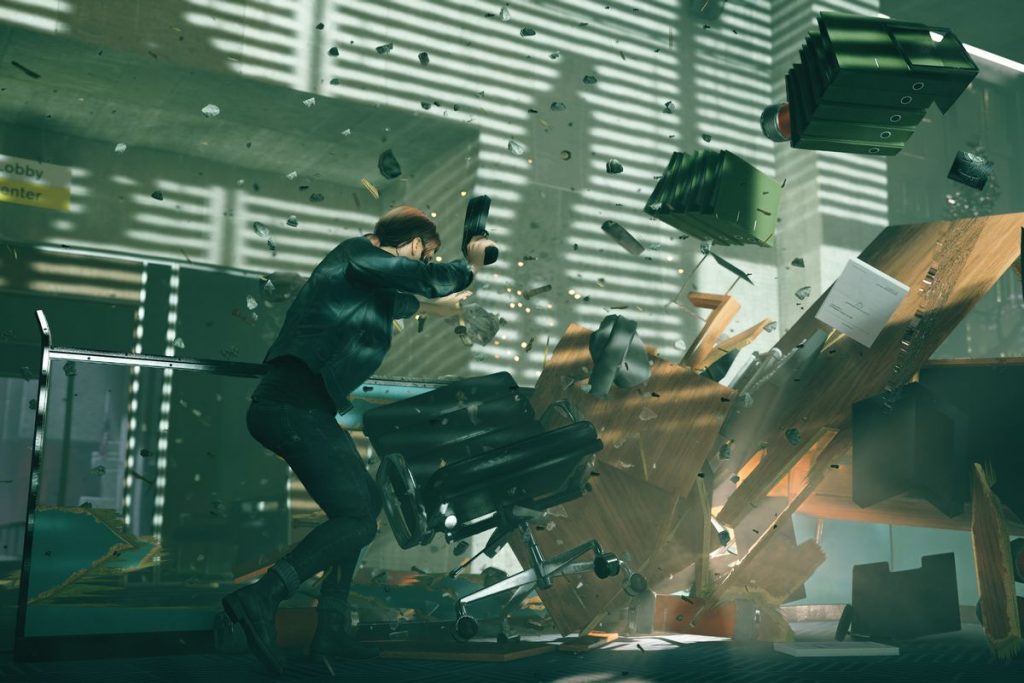 I dodge out of the way of a hissing rocket-propelled grenade. Just in the nick of time. It detonates on the wall behind me, sending a fountain of rubble crashing into the room. I use telekinesis to grab one of the boulders, and hurl it back from whence it came. It smashes through office desks, sends plastic chairs jigging into the air, before ploughing through the infected sod who tries to introduce explosives to my face. He doesn’t even slow the masonry down; it careers into the panelled walling behind, sending wood splinters blossoming into the room, and sending an idyllic landscape painting tumbling to the floor.

This is Control. It’s just as fun as it sounds.

You see, in Remedy Entertainment’s latest utterly bonkers video game, nearly everything is destructible. Annoyed that a drinks trolley is so unashamedly left in a workplace? Destroy it. Taken exception to yet another unflattering portrait of the protagonist, Jesse Faden? Slam it off the wall. Wondering if you can stop video playback by blasting the projector into another dimension? Try it.

But although all of these destructible details are great fun for those players like me who just enjoy messing around, the reason I’m enjoying Control so much is that smashing stuff to smithereens in the heat of battle serves a narrative purpose.

The headquarters of the Federal Bureau of Control (FBC), the shady government institution in which the game takes place, is a neat, orderly workplace. Yes, collectibles paint a story of ever-present danger of death or interdimensional stranding that would make anyone question their career choice. But at least you’re not bored, right? And yes, the FBC was evidently far more concerned with its own interests than the welfare of its employees. But I’d say that’s no different to any other corporation.

At the end of the day, there’s no denying that Ahti, the FBC’s mysterious and wonderfully-written janitor, ran a tight ship, keeping the floors clean and the toilet’s pleasingly well-stocked. Even the Hiss were civilised enough to just settle for a little structural re-arrangement and to hang around mid-air in their possessed employees.

And then Jesse Faden comes along, and all hell breaks loose.

Rather than just being a pleasing gimmick, the carnage that is wrought throughout Control makes you appreciate the power of the Service Weapon and the Objects of Power than grant Jesse abilities, and the risk that the Hiss pose by infiltrating the facility. It reinforces that Jesse is a destructive power in her own right in this tainted, fragile world. It’s undoubtedly Control’s best aspect.

There are some shortcomings, however. As fun as it is to tear through legions of hapless possessed goons, it can become a little repetitive. Most enemy types can be dispatched in similar ways, so once you settle into a routine of shoot, throw, shoot again, and so on, it’s hard to break out of the cycle. What’s more, Remedy’s designers made the curious decision to draw attention to the repetition. You are encouraged to backtrack through previously-explored areas, encountering respawned resistance on the way, to unlock poorly-signposted doors. In addition, there are optional but enticing ‘Kill X enemy type with X weapon’ challenges that send you back to earlier areas, and timed, periodic alert missions that – you guessed it – send you scurrying back. Because I fear being underpowered, I struggle to resist any of these. A timed mission is like a red rag to a bull, dammit!

Whilst the world’s lore is satisfyingly deep and just the right level of self-aware, the same unfortunately can’t be said for Control’s story and narrative delivery.

The plot revolves around Jesse’s desire to find her brother. Fair enough. She’s guided by the mysterious voice in her head. Although mysterious and compelling at first, as the hours march by the intrigue is stretched ever thinner. It doesn’t quite reach snapping point, largely thanks to the joy of exploring new areas and chucking goons through tables, but the story would’ve benefited from a few more turning points to keep it fresh.

The storytelling can be surprisingly clumsy for Remedy at times. All the live action footage and intercutting you’d expect from a Sam Lake-led title is here, but Jesse’s internal guide is used as a convenient justification for some pretty liberal dollops of exposition. The voice acting is solid, but the writing occasionally hits the nose so squarely your eyes will water, and Jesse’s internal Shakespearean monologuing comes across as somewhat lazy.

Control unfortunately suffers from some technical issues, too, at least on my base PS4. When office accessories, rubble and bodies are flying everywhere, my trusty console chugs like an old steam engine, and for some reason there’s some stomach-turning slowdown whenever the game in unpaused.

Despite these issues, Control is consistently fun to play, and has such in-depth, satirical lore than I want to push on just to access the next imaginative, well-realised area of the FBC, and read the next titbit. The game has its fair share of rough edges, no doubt, but Remedy should be applauded for boldly trying something a bit different. And, most importantly, for letting me destroy everything in sight. At the end of a long day, that’s sometimes all I need.